On several occasions, Shree named Horst Heigl (formerly Lozynski) "representative of the West," and in 1975, literally and symbolically by a gift, gave him the "flame of knowledge" to bring it to Germany. In 1976, Shree declared:

"… it will be Germans … who will bring the Fivefold Path and its true spiritual meaning, including that of the fire sacrifice."

Thereupon Horst Heigl and later his wife Birgitt too started to write books with content given by Shree. With His blessing they founded a publishing house:

So far, the books are available in German only.

Some of the books have an interesting genesis which is often related to Shree.

For example, Horst Heigl once gave Shree a print of the painting "The Last Supper" by Leonardo da Vinci. Shortly afterwards, he began to discover astonishing secrets in the painting as well as an incredible geometric system. This also includes the design principle of the Pyramid of Giza, which for Horst Heigl was a key to the geometry of the Agnihotra pot.

As it turned out later, Shree told someone in India about the contents of Volume 2, "Enthüllte Geheimnisse vom Abendmahl des Leonardo da Vinci", at a time when the book was not even written.

The publisher also published books on the practical application of the Fivefold Path, such as "Der Schauspieler in Seinem Dienst" or "Der kleine Fakir Namu und der Fünffache Pfad".

The biographical work „Erfüllte Verheißungen“ (Fulfilled Promises) of Horst Heigl was published on May 17, 2018 for Shree's 100th birthday. 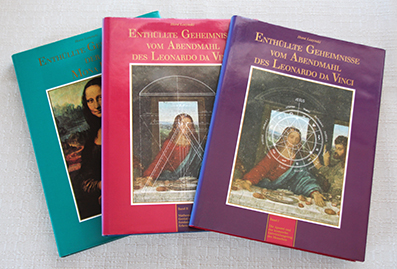 There are several books about Shree and his work in English, such as: